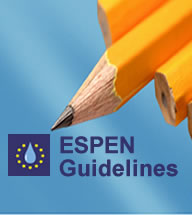 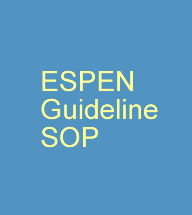 Since 1997, ESPEN publishes guidelines and position papers on a regulatory basis in Clinical Nutrition.

This concept was launched by the authors of the invited editorial on ESPEN disease-specific guideline framework, S. Schneider and J. C. Preiser, who initiated five working groups on different topics (cystic fibrosis, inflammatory bowel disease, cancer, dementia, and chronic intestinal failure) that largely completed their work expected to be published 2015 in Clinical Nutrition. The guideline process was shortly described in the editorial; however, it could not been fully brought into practice. Thus, the process of these five guidelines was not fully standardized yet. Therefore, ESPEN decided to re-launch the guideline process with a modified methodology adapted from a German Guidance Manual. This manual derived from the AWMF (Association of the Scientific Medical Societies of Germany) served successfully for the German guidelines on clinical nutrition published since 2013 (http://dgem.de/leit.htm).

The details of the new methodology that aims to create so-called “S3 guidelines” according to the AWMF nomenclature with a high scientific and methodological standard is presented in a standard operation procedure, which you can find here . The ESPEN Guideline SOP will underlie all future ESPEN guidelines and position papers to ensure maximal quality and coherence.

All ESPEN guidelines and position papers will be reviewed by the ESPEN Guidelines Editorial board (GEB) and finally approved by the ESPEN Executive Committee (ExeCom). At present, the GEB members are Stephan C. Bischoff and Pierre Singer (GEB chairmen), André van Gossum (ESPEN chairman), Michael Koller (methodologist), and Tommy Cederholm.

Flow chart for the structured generation of an ESPEN guideline.

The procedure consists of 10 milestones. Further explanation in the SOP. 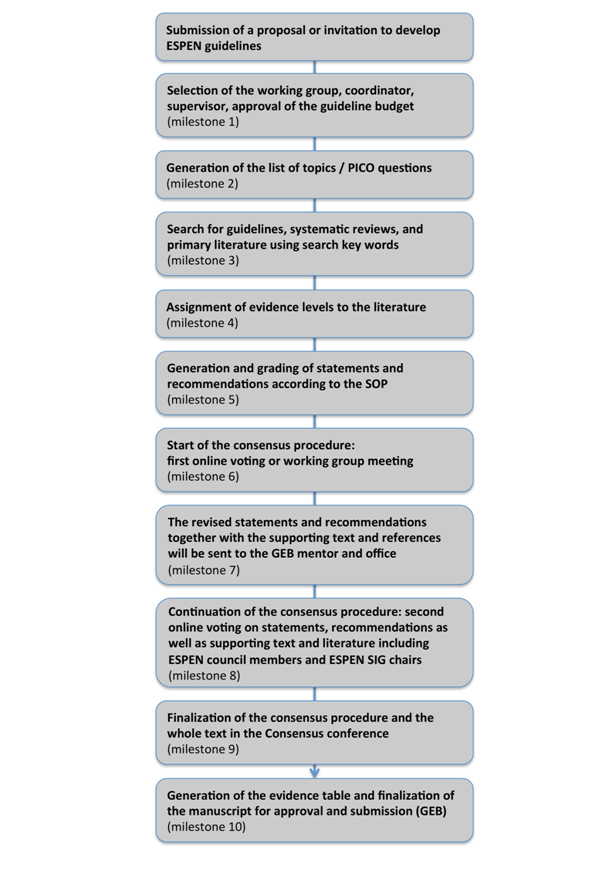